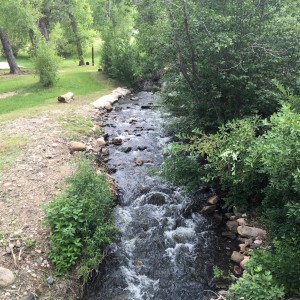 As I write The Sweet Scent of Horses, the Wind in the Pines, my memoir about growing up in the Gallinas Canyon near Las Vegas, New Mexico, I recall a conversation I had with countless visitors.

When newcomers encountered the name of my home river canyon, they were apt to pronounce it “Gal-EE-nas” or even “Galin-ASS.” They would scowl. “Isn’t that “chicken” in Spanish?”

Gallon ass? I gave a little lecture on the dignity and historical importance of the Gallinas River, whose water made possible the meadows for which Las Vegas was named.

“Why would anyone name a pretty creek Chicken Canyon?”

I’d explain. The name referred to wild turkeys, still common in the canyon. “Gallina” was a more general term for fowl in the language of the Spanish colonial settlers of the nineteenth century. “Gallina de la tierra” meant the wild fowl, literally fowl of the earth, the ground.  They may have picked the name for the same reason that Colorado had so many Deer Creeks and Clear Creeks; it was important to convey where a pioneer could find food or clean water.

They’d ask about Hermit Peak, the mountain that dominates the scenery for miles around Las Vegas, New Mexico. 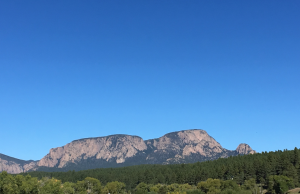 Hermit Peak had several names. Its current name honored a man of faith, who lived in a cave near its summit during the nineteenth century.  El Solitario, an earlier version, meant “the hermit” in Spanish.

As I grew up in the canyon, the origin of another place name, “El Porvenir” was especially intriguing to me. My father named his horse breeding business Porvenir Morgan Ranch. Everyone agreed we lived “in El Porvenir.” But that wasn’t like living in a place as discrete as a town. The name referred to a region dominated by Hermit Peak as though in its figurative shadow. It included El Porvenir Creek that joined the Gallinas a mile above our ranch.

As I was writing my memoir, I wondered if Hermit Peak had ever been called El Porvenir. Why would a Spanish Colonial name any place El Porvenir? The name is used all over the Spanish-speaking world. There are towns called El Porvenir in Spain and in Chiapas, Mexico. 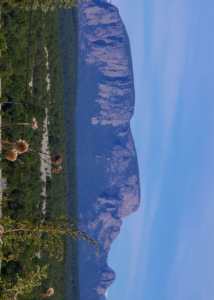 Seen from the size, Hermit Peak resembles a man’s profile

Jennifer Lindline, in her article about Hermit’s Peak in Geology of the Las Vegas Region suggests that the name El Porvenir was a reference to the Biblical prophecy of the return of Christ. Anyone who looks at a map of the Southwest sees that the Spanish named more of their places with religious references than practical ones. The shape of Hermit Peak is seen by many as the profile of a man’s face, further suggesting an allusion to Christ. “El Porvenir” refers to “He of the Future,” the Christ who will come again. But I couldn’t document that the peak was ever named El Porvenir.

In the 1960s, Porvenir meant something more personal to me. I foresaw a bright future for the foals that frolicked on our pastures, and for my parents’ life at their mountain home. For myself, I would carry the joy infused by a pristine place into a larger world.