At the base of  Hermit’s Peak, near the trailheads branching off to Beaver Creek and to Hermit’s Peak, there is the grave of a humble man, well-loved and never forgotten;  gone now at least half a century, known to us only as “Mr. Smith.”  Growing up in the area with summer hikes in the mountains, passing Smith’s Grave near the beginning of the Skyline Trail, stopping respectfully was always part of the hike.  When people were with us that didn’t know the legend, we always told it once again and kept the memory of Mr. Smith alive.  Sometimes, a rebellious camper would want to step on the grave or even to spit on it.  We told them that the grave was guarded by his friends, the Penitentes, who would not allow any desecration and would teach a lesson to any who dared to show disrespect.
From time to time, a naughty camper would touch the grave.  Later that night, some of our camp counselors would ride into camp in a group on horseback and, as arranged in advance with the camper, pluck him from his bed, toss him on the horse and ride out of camp, in a blaze of hooves and dust.  The staff and camper would come up with a tale to tell after returning.  The camper would be returned about an hour later, long enough for everyone to have had a good scare, and seeming to be properly chastised, with a tall tale about what happened for not showing proper respect for Smith’s grave. By all accounts, Smith was a quiet man but he is remembered for being a good friend to his friends.  He was a keeper of confidences, valuing the men he counted as his true friends more that any reward or notoriety that might be his if he were willing to expose the secrets or identities of his friends.  If he was with us today, he could be that rare friend of someone famous or rich and he would never be bought with a million dollar book deal or his own 15 minutes of fame.  Today, such friends, such people, are rare indeed and honoring the loyalty of a true friend is not a tale heard often in our days.  Smith’s story is simply a story of friendship.
I never knew much about the man called Smith.  I knew of his friends, a group of men that were members of a secret religious path, the Penitentes.  The Penitentes expressed their faith through acts of extreme penitence.  When I was small, there were still crosses,larger than a man, handmade of wood, along the trail leading to Hermit’s Peak and the three large crosses that were always up at the top of the Peak.  It is said that that the brothers would carry these heavy wooden crosses the many steep miles up  the trail especially on Good Friday, walking barefoot, often in snow, to reenact the carrying of the cross of Christ before His crucifixion, stopping at the stations of the Cross along the way.    It is said that they walked up the trail to Hermit’s Peak, each man scourging the bare back of the man before him with ropes or whips made  of yucca fiber, to humble themselves and honor the suffering of Christ.  One man would be chosen to represent Christ by being lashed with ropes or whips made of yucca fiber or, in earlier times, nailed, to the largest cross on Good Friday and taken down the following morning. It is also said that the chosen one would find a pair of shoes on his porch the morning of the final services which began in the morada, or meeting place. 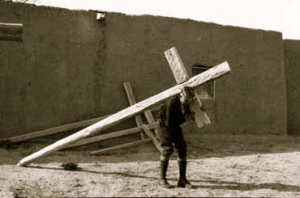 The Penitentes are known as Los Hermanos Penitentes or as Hermanadad de Nuestro Padre Jesus, and trace their origins as a lay brotherhood back to the third order of St. Francis de Assisi, established in Italy in 1221 and are also known as the Tertiaries.
Juan de Onate was himself a Tertiary and was one of those who brought the brotherhood from Spain to New Mexico.  After Bishop Lamy publicly condemned the brotherhood around 1850, the practice of the faith went underground and accounts for the secrecy surrounding the members and their meetings.  Finally in 1947, Archbishop Byrne recognized the Penitentes and a Hermano Supremo was approved by him and traveled to the groups to grant a charter to those willing to worship under the guidelines set forth by the Archbishop.
Old ways die hard and the tradition of secrecy and the fervor of the old meetings has not been forgotten.  Just remember, should you ever be entrusted to know the name of any member, the location of any active morada or somehow come upon a ceremony not meant for your eyes, choose the path of Mr. Smith and follow his example of silence and friendship.  Remember too, to tip your hat or stop for a moment of silence at Smith’s grave should be hiking up our way.  You never know who might be watching.